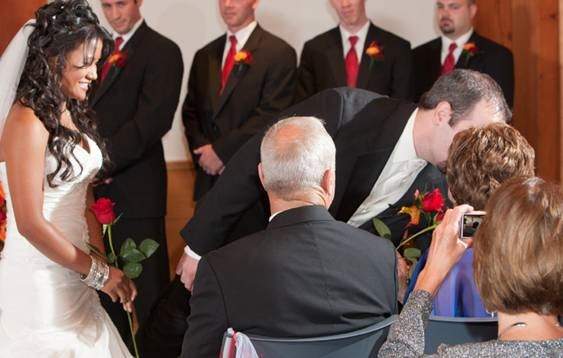 ____ and ____ your mothers are both here to bless your marriage. As a token of love of family it is befitting that you are presenting them with these roses. For it was them that brought you life and taught you your first lessons about love.

Parent Vows for their Children

Often marriage is thought of as the joining of two people. In reality, marriage joins many lives. This is most apparent with children present. In the ceremony proper, a bride and groom take an oath to each other. The exchange of vows. _____ and _____ will now take a similar vow, for their children.

Do you ____ and ____ promise to honor and protect (these children) ____ and ____, and provide for them to the best of your ability and promise to make their home a haven, where trust, love, and laughter are abundant, and make these promises lovingly, and freely, and vow to honor them for all the days of your lives?

As a symbolic gesture of their commitment to family, ____ and ____ will contribute crystalline to a vase which represents their lives joined together. This will be followed by the other members of the family each pouring in together their crystalline as well. The idea being that, once joined – never separated.

____ and ____ will now light their unity candle.
The individual candles represent their lives before today. Lighting the center candle represents that their two lives are now joined into one light and represents the joining together of their two families.

In conclusion of our ceremony, as a symbol of their everlasting love for each other, ____ and ____ will observe the tradition of releasing two doves into flight. The dove has long been the sign of love and peace. And they mate for life. As they travel off together, with them will go all of our good wishes for this couple’s new life to come. When the doves are released, we ask that all of you fill yourselves with hope, and a good wish for ____ and ____ for many years of happiness to come.

_____ and _____ will now take their vows using the tradition of the oathing stone. For those of you not familiar with this tradition, it is when the bride and groom either hold or put their hands together on a stone as they repeat their wedding vows. An oath given near a stone or water was considered to be more binding. Some believe it is where the phrase 'set in stone' comes from.

We also honor the memory of those not present remembering especially bride or grooms relative's name.

The bride and groom will now take their vows to each other in the tradition of hand fasting. For those of you not familiar with this tradition it is when the couple stands together and pledges themselves to each other as they have their hands gently bound with a piece of cloth. Some believe that this is where we get the expression "tying the knot".